The Likelihood Ratio (LR) is the likelihood that a given test result would be expected in a patient with the target disorder, compared to the likelihood that that same result would be expected in a patient without the target disorder.
In other words…
The LR of any test or clinical finding or symptom is the probability of that finding in patients with disease divided by the probability of the same finding in patients without disease:

If LR is 1 it means that you have the same probablity to find a positive test or a clinical finding or symptom in patient with or without the disease.
How to calculate it?
The best literature usualy report LR, but the best is also rare so generaly, good literature, reports sensitivity and specificity, with this and a calculator you have easily you LR 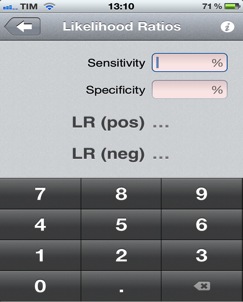 If you don’t have a smartphone,
you can still calculate it with a simple formula:
LR+ =  sensitivity/(1-specificity)
LR-  =  (1-sensitivity)/specificity
this is the formula….but what does it means?
LR+ =  True Positive Rate/ False Positive Rate
LR-  =  False Negative Rate/ True Negative Rate
The best the test (more sensitive and more specific), the higher LR+ the lower LR- *
What is it for?
LR is used to assess how good a diagnostic test is and to help in selecting an appropriate diagnostic test or sequence of tests.
The likelihood ratio combines information about the sensitivity and specificity of a specific finding (symptom, clinical findings, blood or instrumental tests).
It tells you how much a positive or negative result changes the likelihood that a patient would have the disease.
LR has advantages over sensitivity and specificity because it is less likely to change with the prevalence of the disorder, it can be calculated for several levels of the symptom/sign or test, it can be used to combine the results of multiple diagnostic test and it can be used to calculate post-test probability for a target disorder.
LR may range from 0 to infinity.
Findings with LR greater than 1 (LR+) argue for the diagnosis of interest; the bigger the number, the more convincingly the finding suggests that disease. Findings whose LR lie between 0 and 1 (LR-) argue against the diagnosis of interest; the closer the LR is to 0, the less likely the disease.
Findings whose LR is about  1 have poor diagnostic value.

Here is everything you need to know to enjoy this bolg, but if you are hungry for knowledge…carry on…
How to calculate post test probability?
First of all you have to provide information about the patient. You need to specify the pre-test odds: the likelihood that the patient would have a specific disease prior to testing. The pre-test odds are usually related to the prevalence of the disease, though you might adjust it upwards or downwards depending on characteristics of your overall patient pool or of the individual patient using, than you can use, for example, the Fagan Likelihood Ratio Nomogram 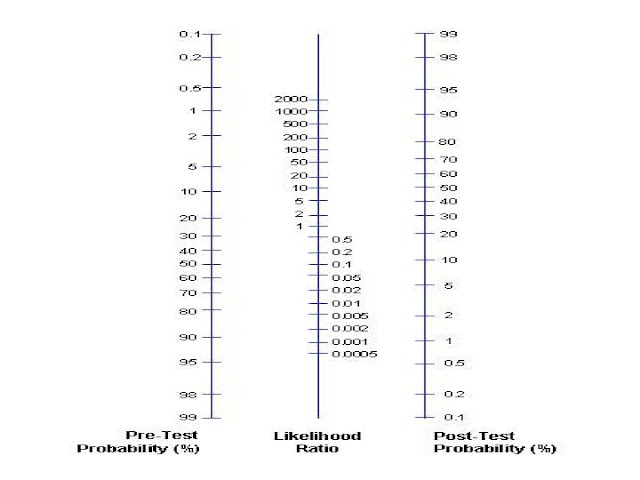 A practical example
You have a patient with a pretest probabilty of a target disease of 50%.
You have three different test for this disorder, but you have to choose only one of them or your primary will dismiss you
Test 1: LR+ 2 LR-0,01
Test 2: LR- 0,3 LR+3
Test 3: LR+10 LR-0,5
If you still want to pay your bank loan, but you also want to save yor patient from wrong diagosis and yourself from prison, you need to know if the test you want to perform will help you to confirm or exclude the disease, in other words you want to know if that test will rule in or rule out the disease.
You can use our model to see approximately and visualy the performance of your test… 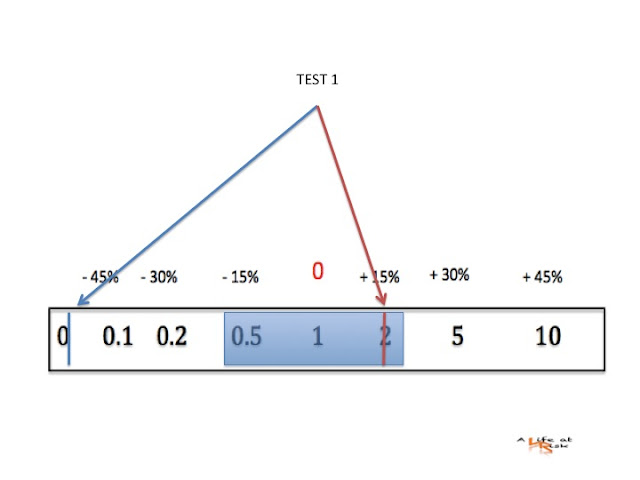 …or you can use Fagan Nomogram to asses the post test probablity
Draw a line from pretest probability to post test, through your LR 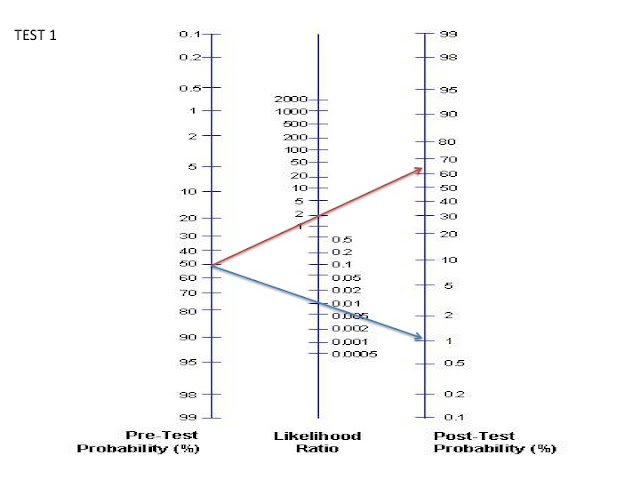 TEST 1: If the test is positive your probability that the patient has the target disease increases from about 50% (pretest probability) to about 65%…not a great goal, in fact, LR+2 is included in the gray zone (poor utility)
…what if it is negative?
It decreases the probability from about 50% to about 1%. Great!!! This test is useful to rule out the disease if negative… but, be carefull, if it is positive it may bring you in a very bad position with your patient and your bank! 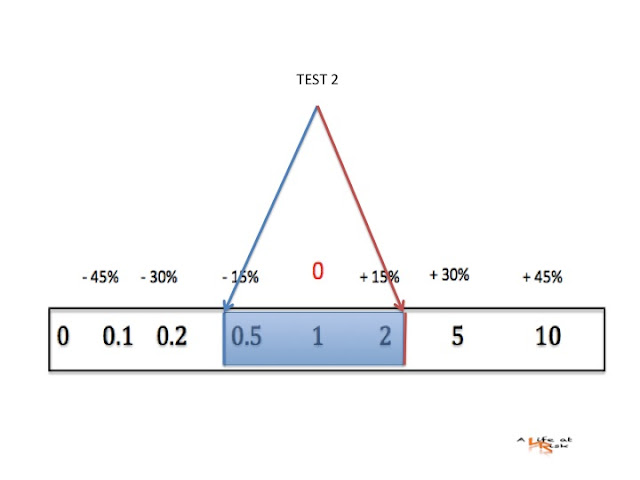 Both LR are in the extremity of the gray zone… use it only if you are very brave or if you come from a rich family. 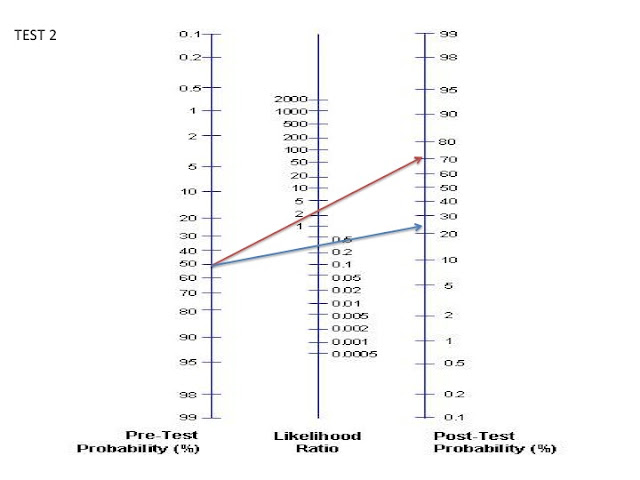 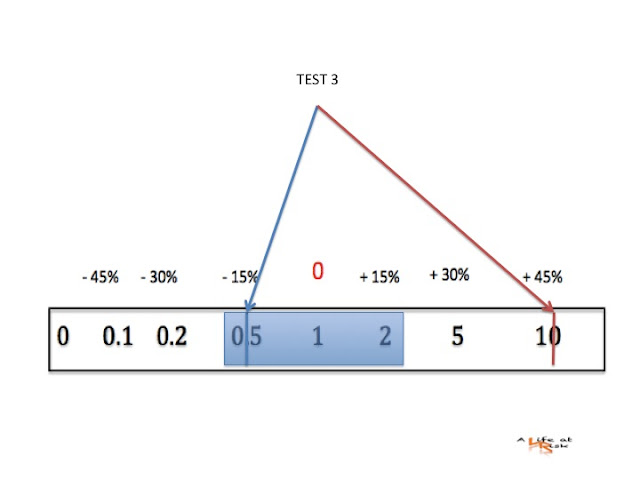 The positive likleihood ratio of test 3 is very far from the gray zone
but the negative one is in it, what does it means? 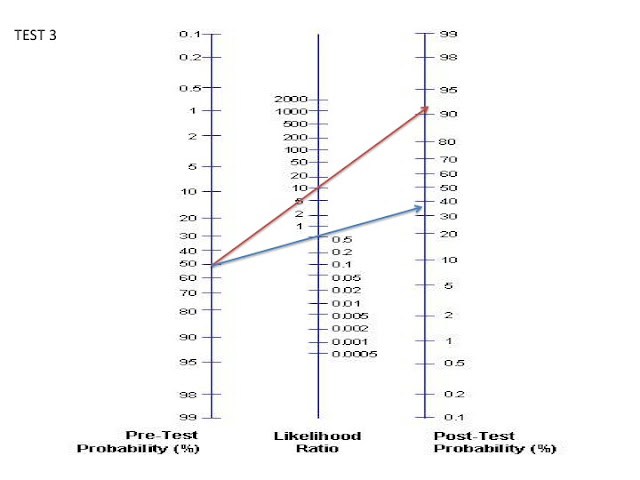 If positive it increase the probability from 50% to about 90-95% but if the test is negative you could discharge a patient who still has about a 35% probability of the target disease, from your emergency room!
You see…your Life is at Risk!!!
BE CAREFUL!  A very low or a very high pretest probability does not change this much with any test…all tests are imperfect…
Ilenia Spallino
*Thanks to Rodolfo Sbrojavacca for his wise suggestions